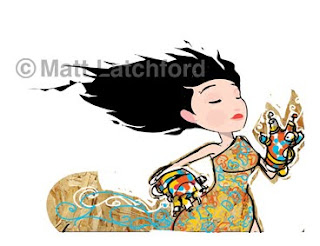 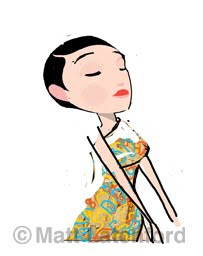 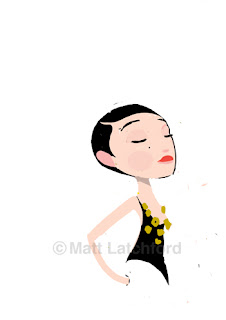 I have been wanting to revive my character that I created for the Windsor Contemporary Art Fair as I think it's a little bit sad that the final piece is locked away somewhere in storage and probably won't see the light of day again. Anyway she was about 7 foot tall anyway so it's not like I have the space to hang it anywhere!!
You can see one of the original thumbnails I did of her which wasn't the final one we used in the mural but i actually prefer this version. The background texture was a sample of chipboard which was what we worked onto for the show (posted below!). Great to work on for random shapes to pick up on but it destroyed most of my brushes!!!
It was soon clear however, at least for now that I don't think she will transfer to watercolours. Initial sketches have proved a little too flat which is fine for graff or comic illustration but I want something a bit looser to work with rather than heavy, dead line etc.
I also made quite a drastic decision about her hair but once again it just seemed too flat. Seems like a contradiction as the final thumb is quite flat and simple but that will give me lots of space when it comes to the watercolours. I like to have a rough idea of a final look and planning is very important but I also enjoy the freedom of not knowing what textures will appear in the washes. I won't even bother trying to plan this in the thumbnail stages!
There is something about those gloves she wears in the original a la Edward Scissorhands that I still want to work with but perhaps it will be for a different character now!
Posted by matt latchford No comments: 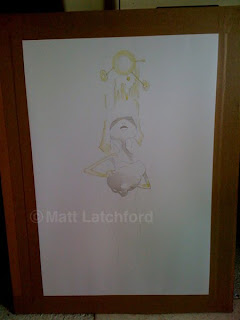 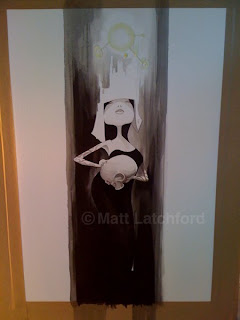 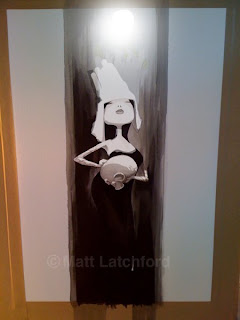 I have begun the next series of paintings for The Soulful Gallery exhibitions lined up later this year!
There seems to be a few familiar symbols and motifs trying to get through again including tattoos, tentacles and skulls. They are fun to painting anyway and it seems like I need to get these out of my system before they let me move on so for the time being here are a few of my works-in-progress!!!
The first two are pics of a piece I have temporarily named "zodiac" (sorry about the quality !). The last image of zodiac is a photoshop version where I have painted over some of the grey washes in the original headdress and I think I am going to have to repaint it, because it looks much more dynamic. Shame, I've got some wonderful 'happy accidents' that i just don't think I am going to be able to replicate :(
Posted by matt latchford No comments: